Loreto Clonmel: 9-11
St. Augustine’s College, Dungarvan: 0-10
Loreto Clonmel made amends for their Munster Final loss at this stage last year by comprehensively defeating St. Augustine’s, Dungarvan. A powerful second half proved to be too much for their Waterford opponents as Loreto were ruthless in attack. Loreto win their first ever Munster ‘A’ Junior title to add the Senior Munster title won only two weeks ago.
read more
The first half of this game was a very competitive affair with both sides working hard to gain a foothold in the game. St. Augustine’s registered the first point of the game after 2 minutes. Loreto were slow to get into proceedings but recorded their first score with an opportunist goal from Caoimhe Mulcahy after 6 minutes. From here the game settled into a very tense affair with both teams defending excellently and turning over possession. Between the 12th and 25th minute both sides traded points with Clare Walsh, Eimear Quirke & Caoimhe Mulcahy scoring for Loreto as they attacked into a strong cross wind. Eimear McKeown made two noteworthy saves to frustrate Dungarvan’s attempt to score a goal. However, as the half came to a close, Loreto struck the back of the net twice. On 26 minutes Clare Walsh finished well while on 31 minutes Saoirse Keating slotted home after a wonderful run from Bríd McMaugh. The half ended with Loreto leading on a score line of 3-04 to 0-05
St. Augustine’s began the second half by scoring a point from a free tipped over the bar by Loreto’s defenders. Loreto began to dominate possession from this point on however, with their half back line of Nora Martin, Gretta Nugent & Triona Ryan starting to gain good possession and build attacks from the back. The next seven scores were kicked by Loreto as they added 3-04 to their tally. The goals were scored by the clinical Caoimhe Mulcahy who scored from play and the penalty spot and Clare Walsh who scored her second of the game. Possession of the ball and hard running were driving Loreto on and with a Keri Tarlenton point 21 minutes into the second half, all of Loreto’s half forward line were on the scoresheet. Eimear Quirke, Clare Walsh and midfielder Brigita Valuntaite also kicked some fine scores from play. As the half wore on the rampant Caoimhe Mulcahy finished two more goals to make it a total of 5-02 for her efforts. St. Augustine’s continued to work to compete but managed to only add five more points in this half. Player of the match was given to Nora Martin who at half back won possession in defence & attack throughout the game to great effect.
Loreto can now look forward to representing Munster in the all-Ireland semi-final against St. Catherine’s, Armagh which will take place in Clane, Co. Kildare on March 23rd at 12.30pm.
Loreto
1.Eimear McKeown; 2.Tamara Davis; 3.Veerle Van Der Wall; 4.Ailis O’Meara; 5.Nora Martin;  6.Gretta Nugent; 7.Triona Ryan; 8.Brigit Valuntaite; 9.Brid McMaugh; 10.Keri Tarlenton; 11.Eimear Quirke; 12.Clare Walsh; 13.Caoimhe Mulcahy; 14.Saoirse Keating; 15.Meadbh Mulcahy; 16. Aoife Morrissey; 17. Alanna Quirke; 18. Lauren Boland O’Reilly; 19. Aoife Campion; 20. Lucy Boland; 21. Megan O’Grady; 22.Aoibhe Brown; 23.Katie Wyse; 24. Kate Moore 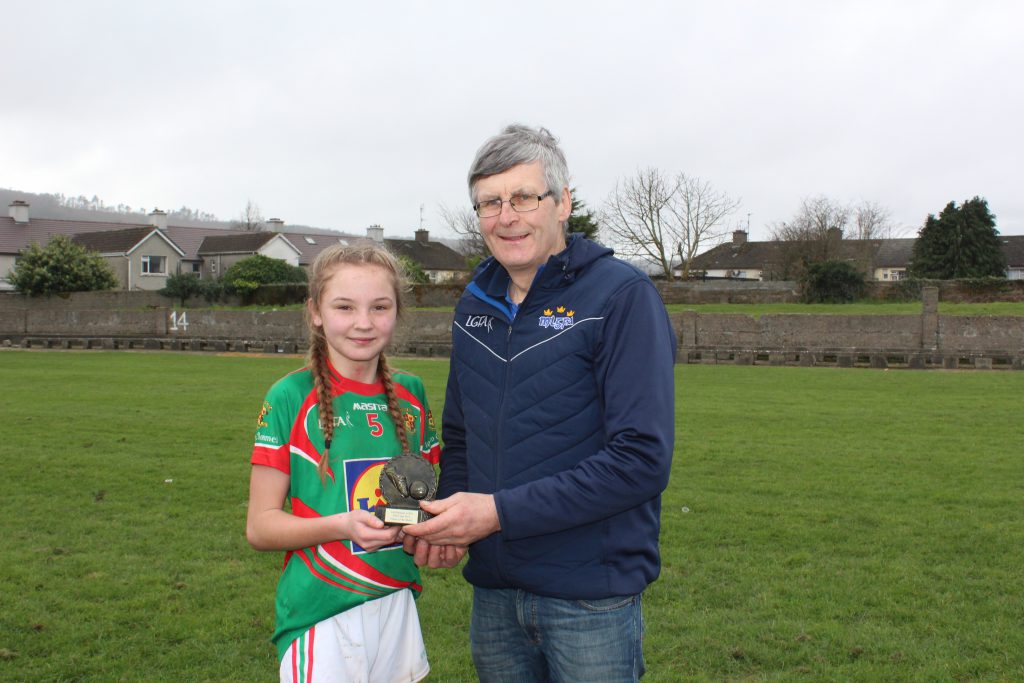 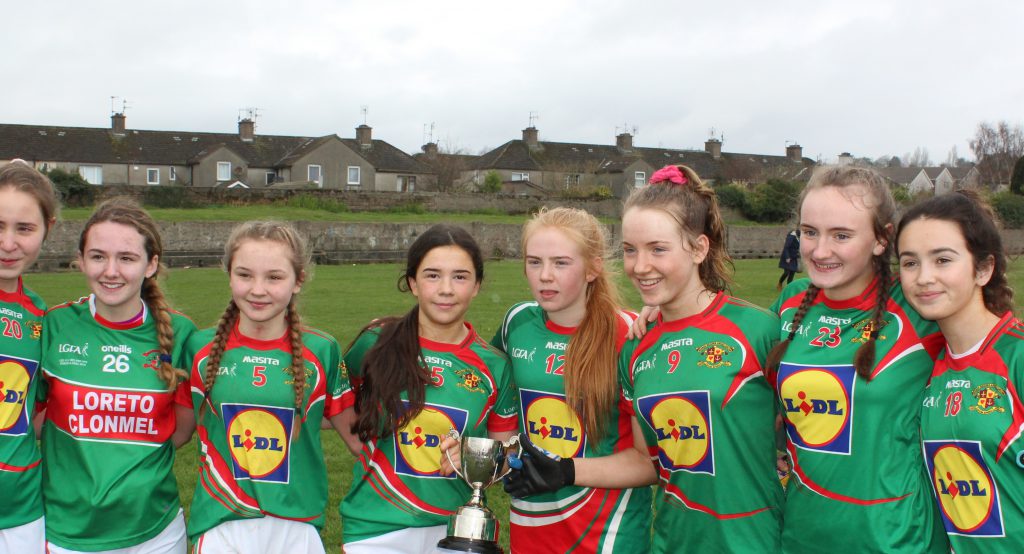 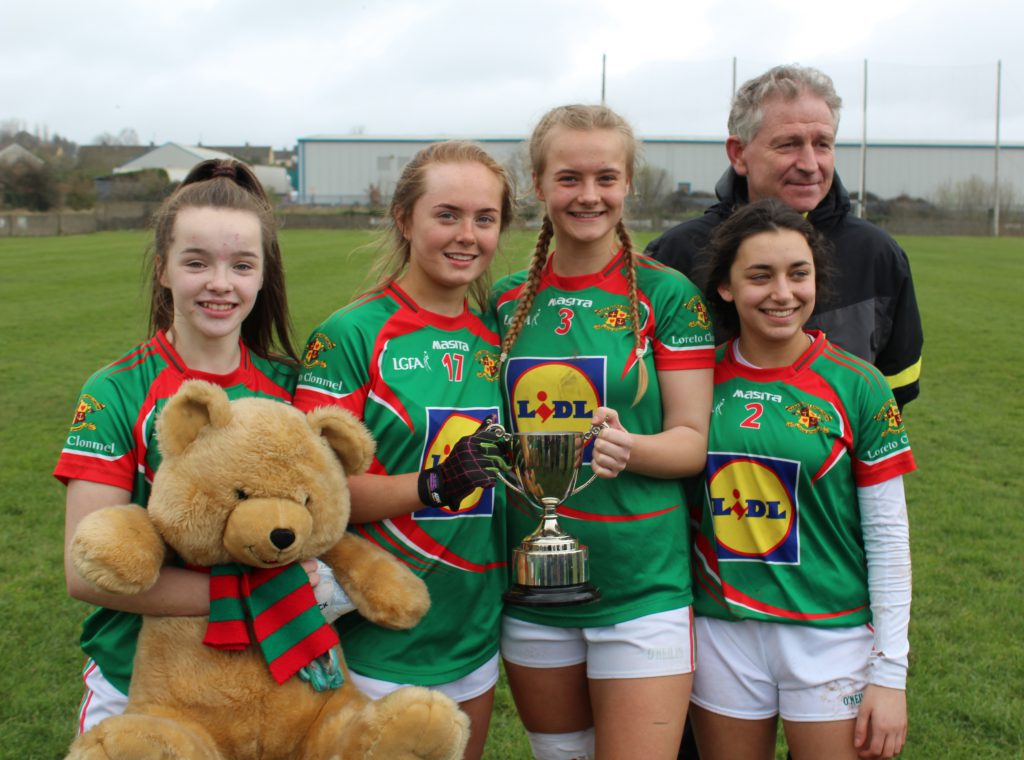 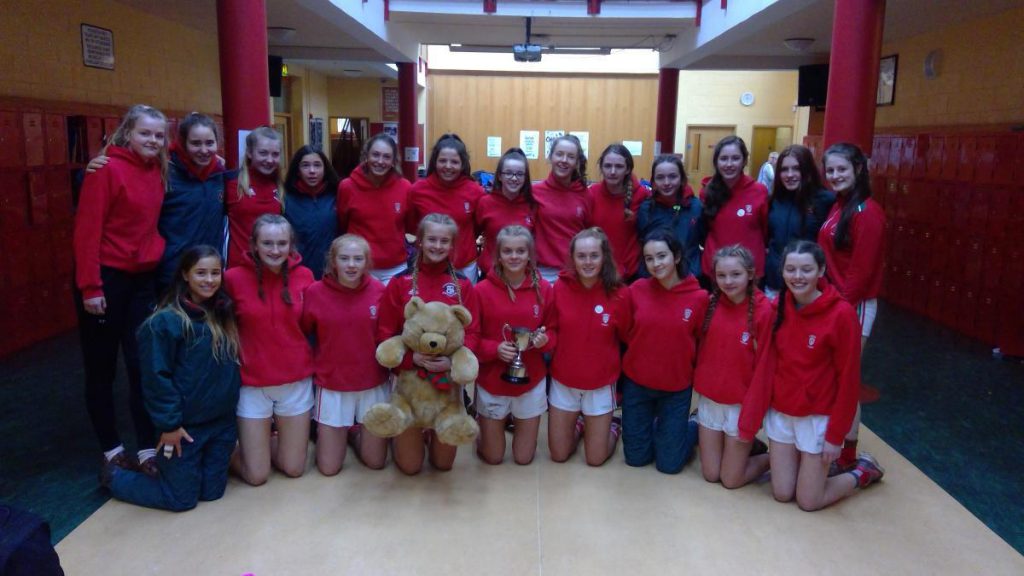 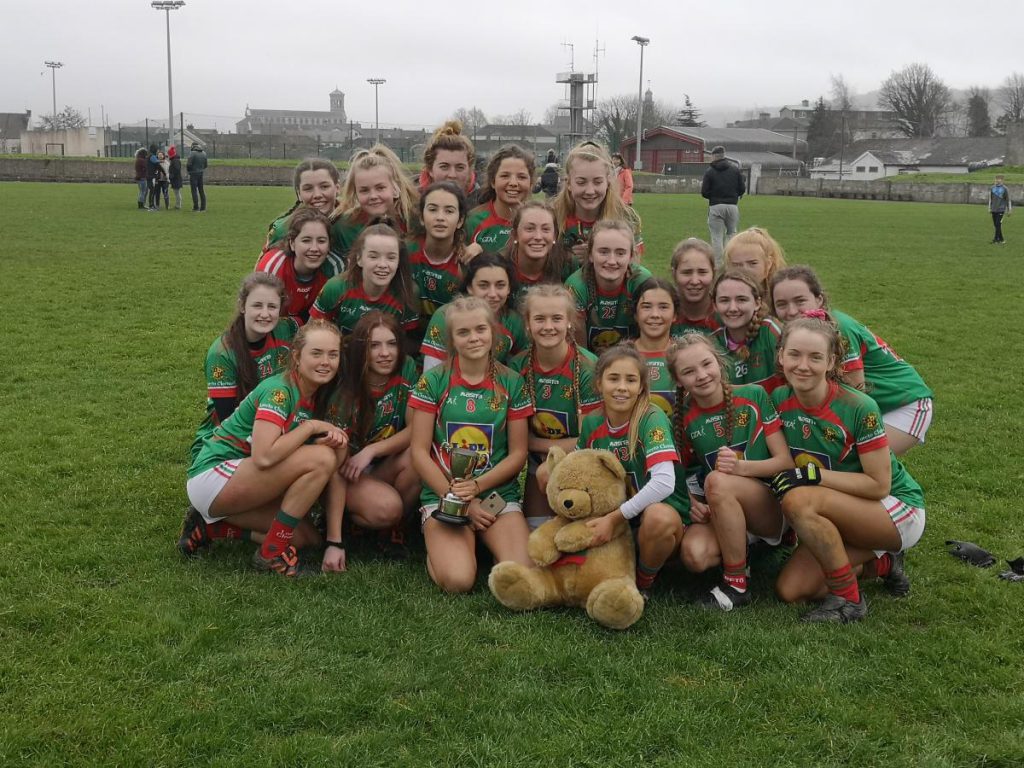 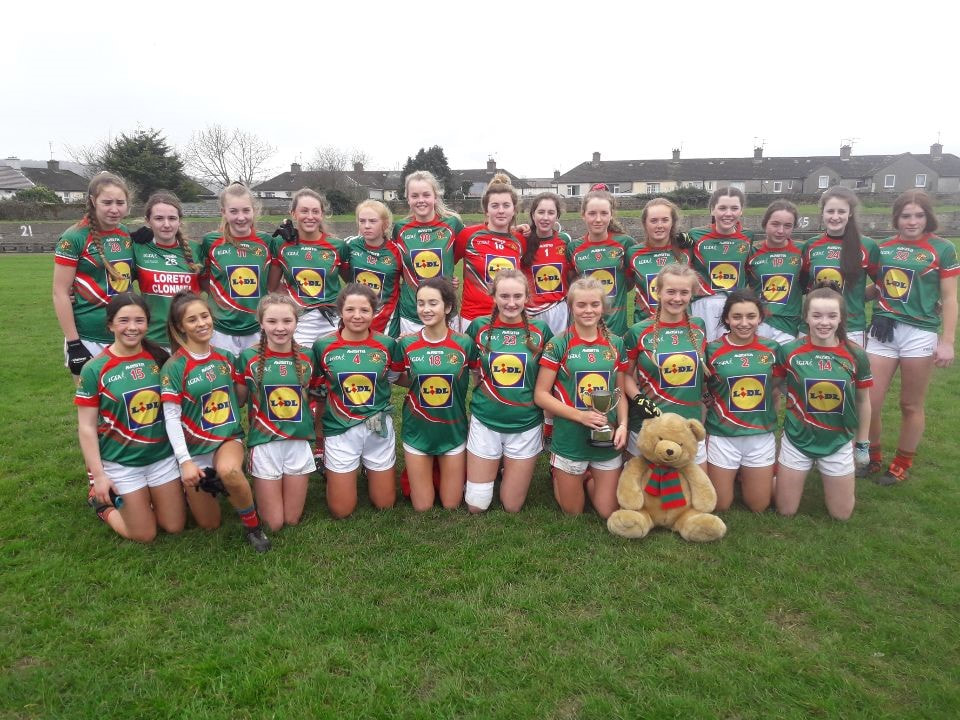 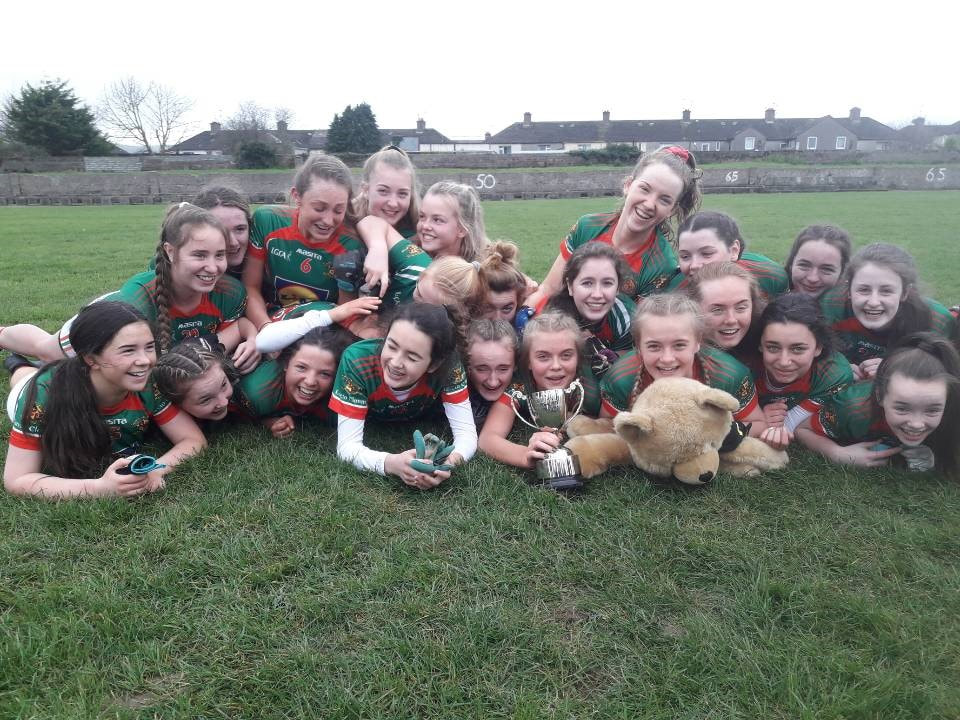 Loreto Clonmel (Tipperary) 3-14
Scoil Chriost Ri, Portlaoise (Laois) 2-9
LORETO Clonmel are into the Lidl PPS All Ireland senior A final following a hard-earned win over Scoil Chríost Rí Portlaoise in Heywood today.
read more
Ava Fennessy helped herself to 1-8 with Anna Carey scoring 2-2 as they blitzed Portlaoise with a powerful second-half performance.
Loreto recovered from a slow start to put in an impressive second-half display to win by seven points in the end.
Powered by Laois senior players Erone Fitzpatrick and Emma Lawlor, the Portlaoise school got off to a great start.
Fitzpatrick got the first of her tally after three minutes when she pointed and midfielder Sarah Larkin added another straight away.
Ava Fennessy hit back with a free for the Tipperary girls but Portlaoise had their first goal when Fitzpatrick finished to the net following a pass from Lawlor in the 10th minute.
Loreto responded straight away, however, with the impressive Anna Carey goaling after a brilliant run.
A Carey point drew the sides level and Loreto went into the lead for the first time when Ava Fennessy was on target from a free.
An Emma Lawlor free squared things up and Portlaoise then got back in front when Larkin got her second. But an injury time point from Carey meant the sides went in level at the break, 1-4 each.
Portlaoise again started the second half well with a couple of frees from Lawlor and they could have opened up a lead only for Loreto denying Orla Hennessy with a goal chance.
The excellent Fennesssy and Jenny Everard pointed to put Clonmel into the lead in the 10th minute of the second half and they never looked back from there.
Carey’s second goal with 11 minutes remaining put six points between the sides and Fennessy added on a string of fine scores to keep her side on top. Kellyann Hogan and Niamh Martin also got in on the scoring and Fennessy got their third goal with two minutes remaining.
Emma Lawlor pulled one back for Portlaoise but it was too late and the Clonmel girls now go forward to an All Ireland final date.
SCORERS – Loreto, Clonmel: Ava Fennessy 1-8 (0-4 frees), Anna Carey 2-2, Jenny Everard 0-2 (one free),  Kellyann Hogan and Niamh Martin 0-1 each; Scoil Chriost Ri: Emma Lawlor 1-5 (0-4 frees), Erone Fitzpatrick 1-2, Sarah Larkin 0-2.
LORETO, CLONMEL: Aoibhin Coady; Veerle Van Der Wal, Maeve Ryan, Brigita Valuntaite; Niamh Martin, Sadhbh Hallinan, Orla Winston; Kellyann Hogan, Cora Maher; Anna Carey, Aine Fitzgerald, Anna Morris; Jenny Everard, Ava Fennessy, Eimear Quirke.
SCOIL CHRIOST RI: Aoife Conlon-Hyland; Niamh Crowley, Rebecca Reddin, Ciara Byrne; Zoe Keegan, Elaine Daly, Julia Cahill; Sarah Larkin, Aoife Daly; Isabella O’Toole, Emma Lawlor, Erone Fitzpatrick; Jenny Murphy, Jennifer O’Neill, Orla Hennessy. Subs: Shauna Dooley for Keegan
REF – Barry Redmond (Wexford) 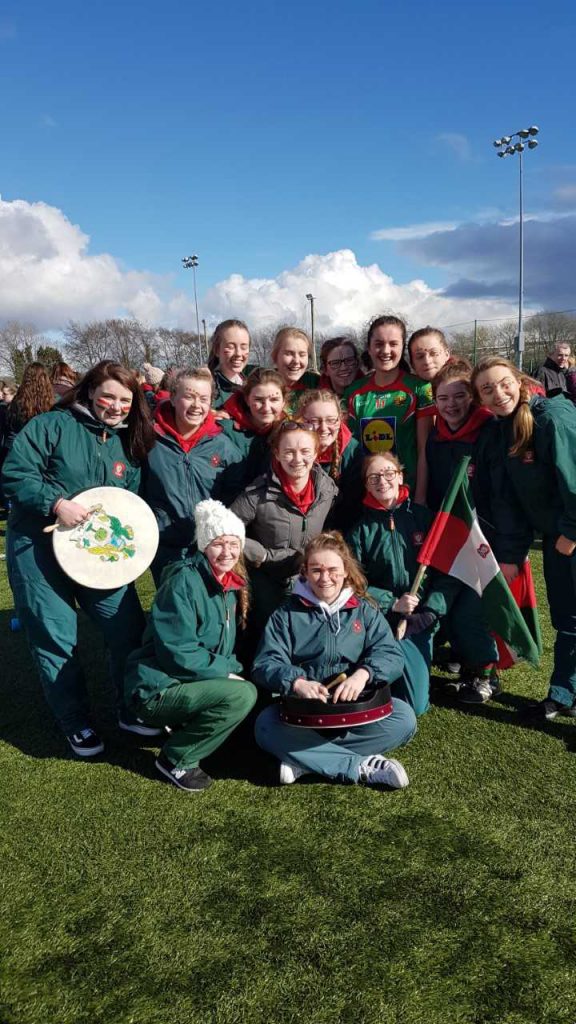 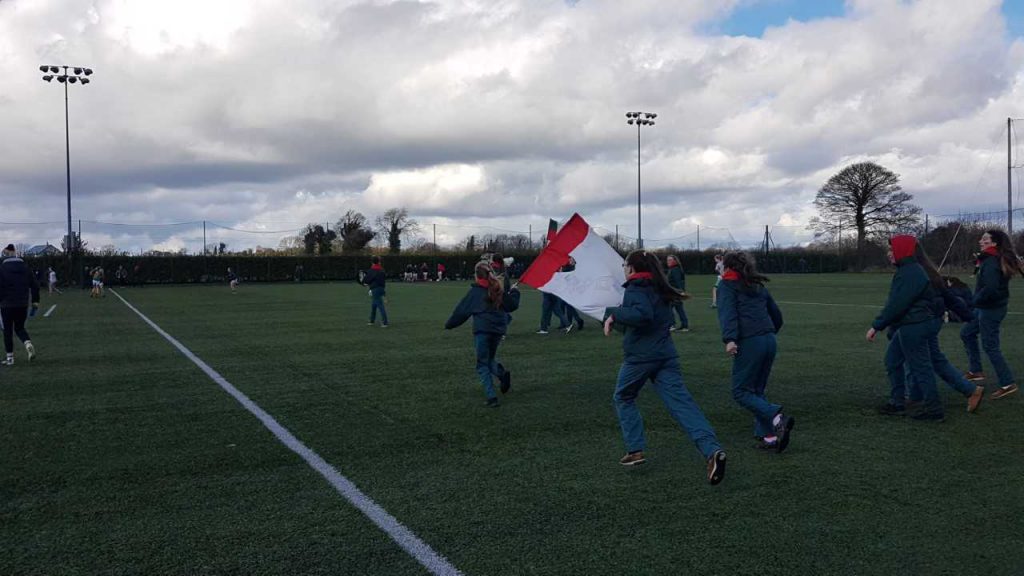 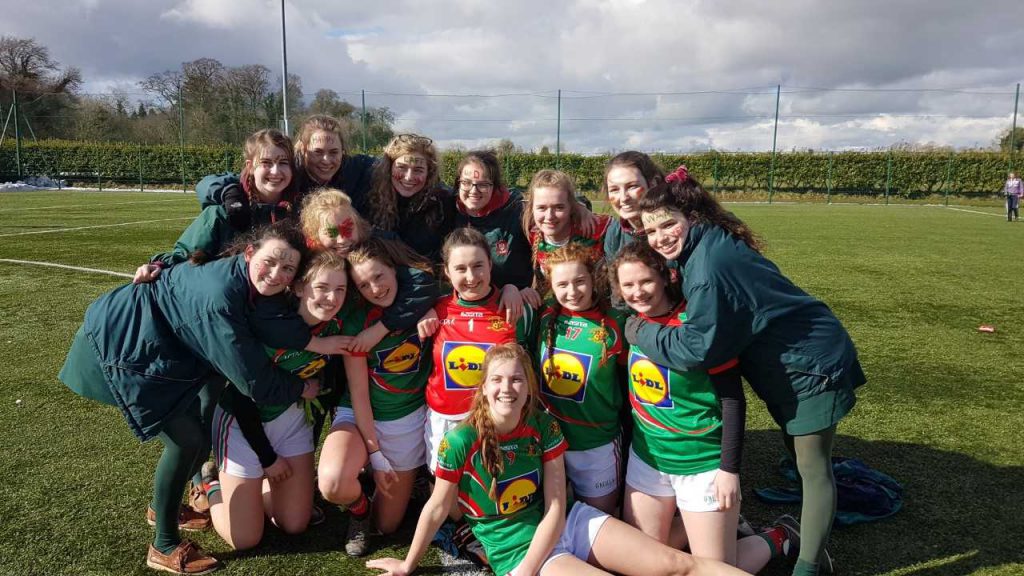 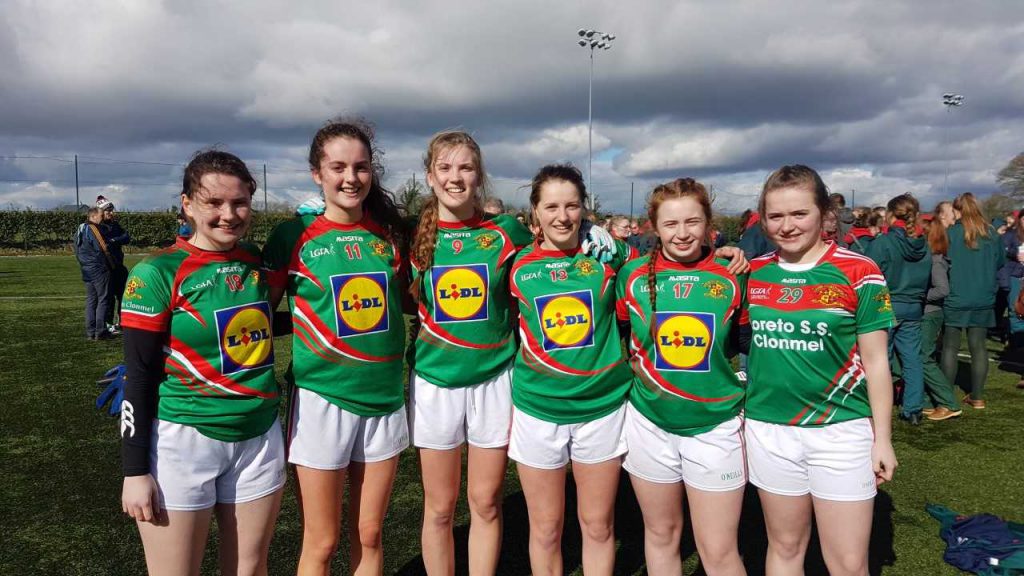 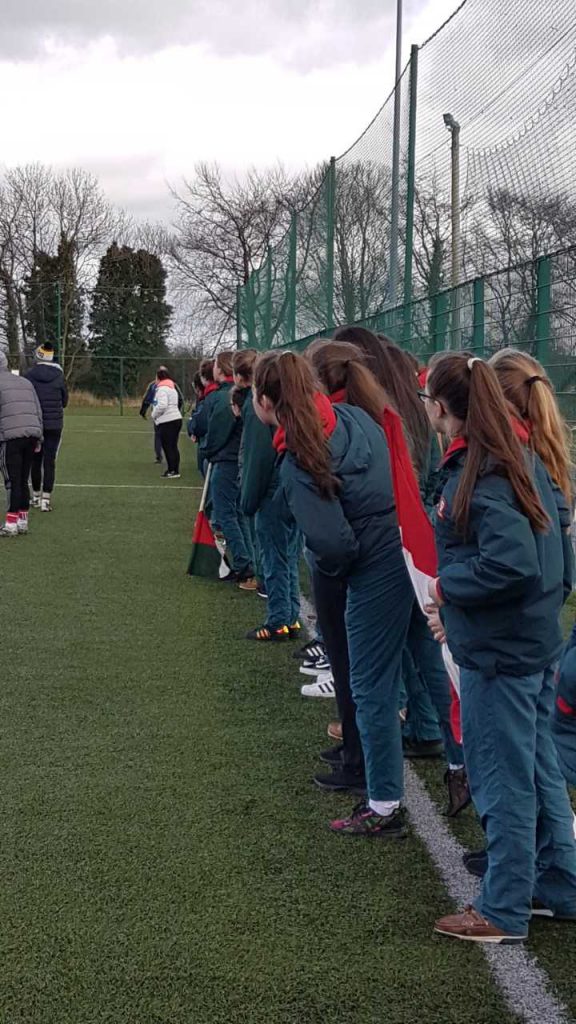 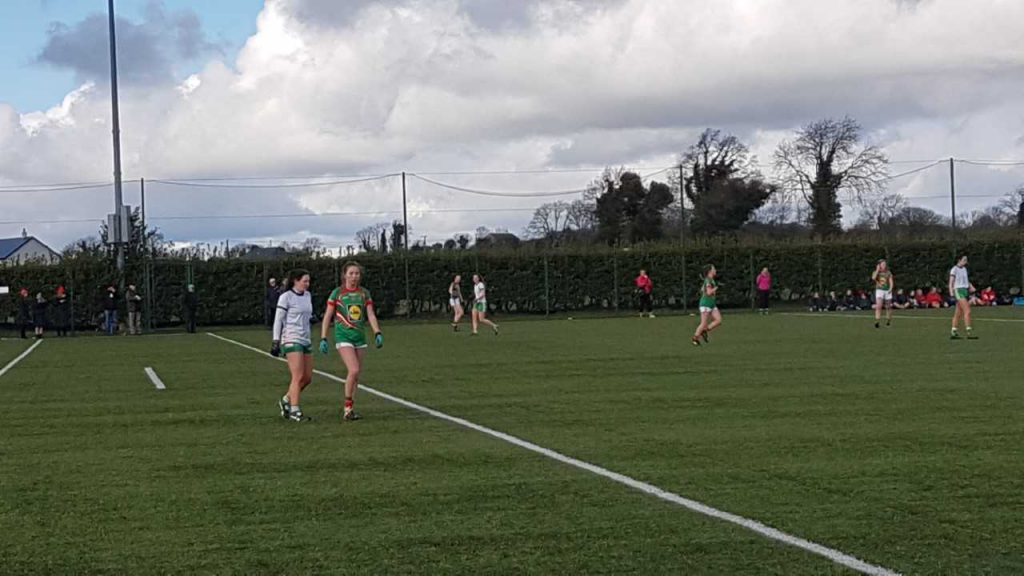 Senior Footballers march straight through to Munster A final after defeating John the Baptist, Limerick! 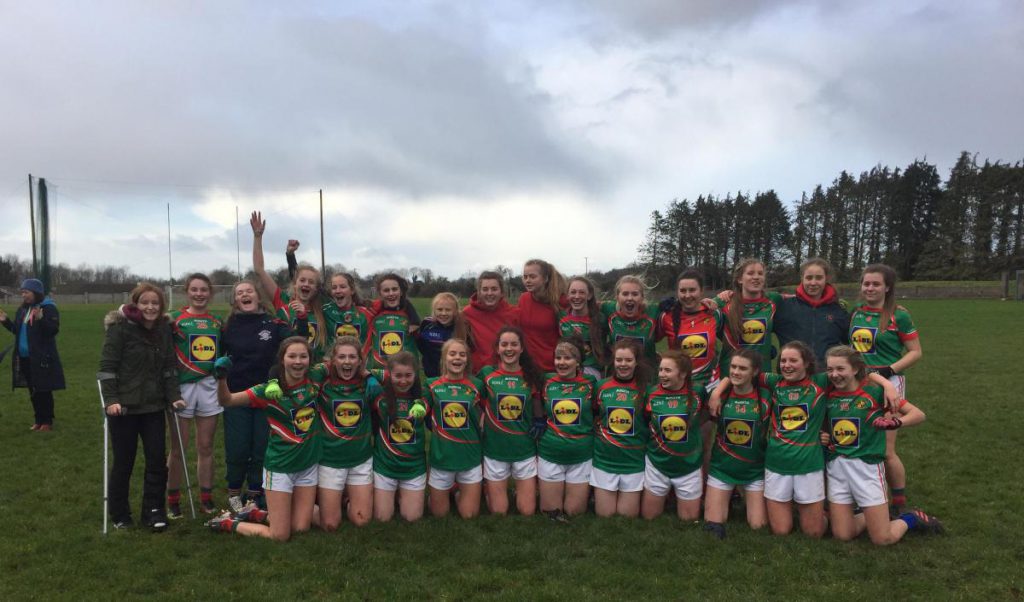 Path to the final.
In recent years, Loreto Secondary School has developed a strong reputation for Ladies Football. In 2011, Loreto claimed their first Munster and All-Ireland titles. Since then, they have also progressed from Junior C to Junior A, unfortunately losing out in this year Munster A final. Loreto’s First Year and U14s teams compete annually in County and Munster blitz competitions, and have earned many successes over the years. This year’s Senior team, comprised of varying feeder clubs, beat three Cork teams; Colaiste Choilm Ballincollig, Christ the King Douglas, and St. Mary’s Mallow, in the group stages, before progressing to beat Colaiste Na Sceilge in the semi-final. Loreto overcame stiff opposition from Scoil Phobail Slaiabh Luachra, Rathmore in the Munster final, before defeating Connacht champions, Sacred Heart, Westport, in the All-Ireland semi-final to reach the today’s final.
Below are some photo’s from the semi final. 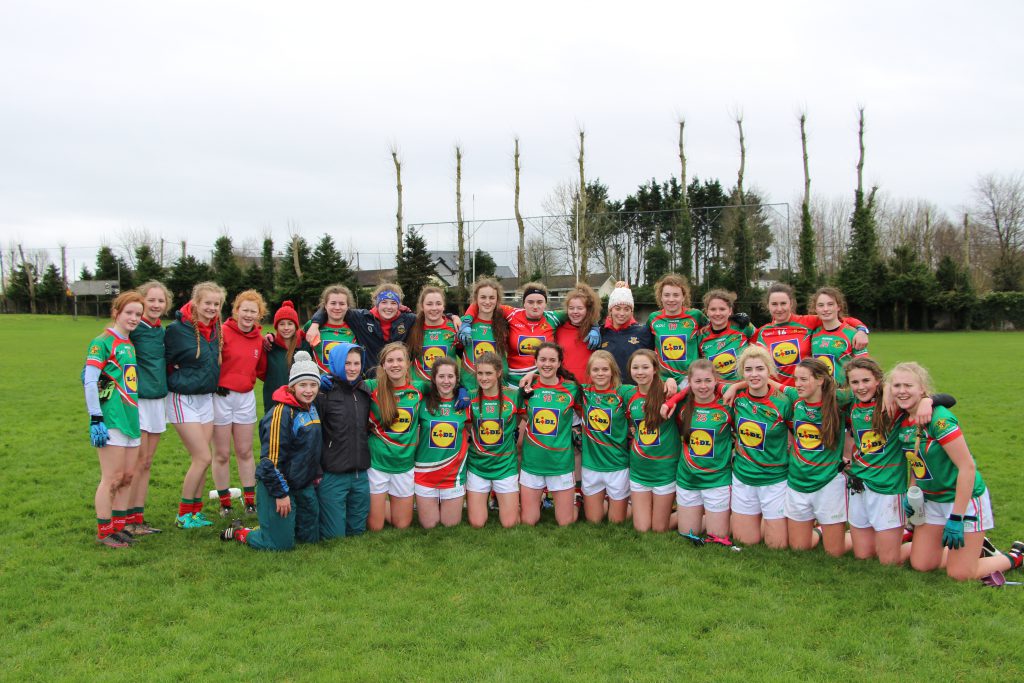 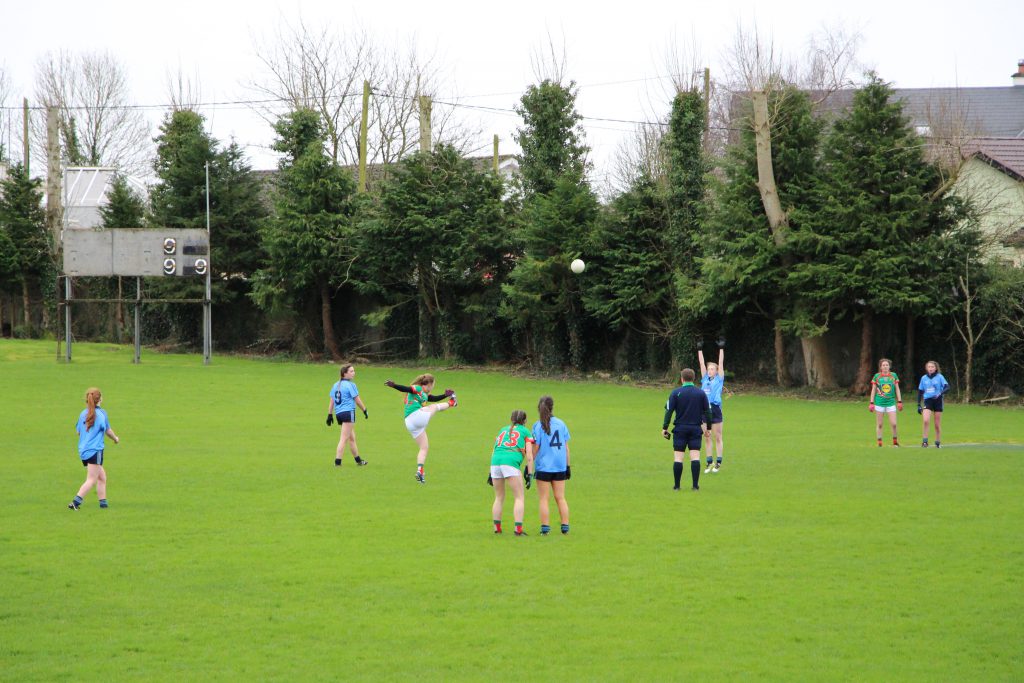 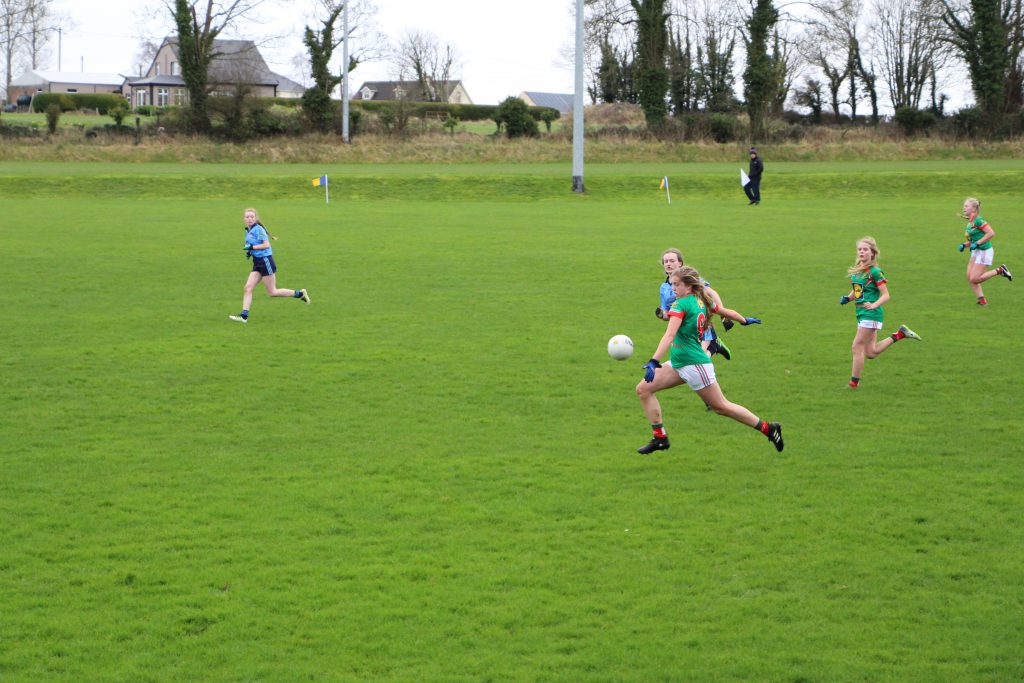 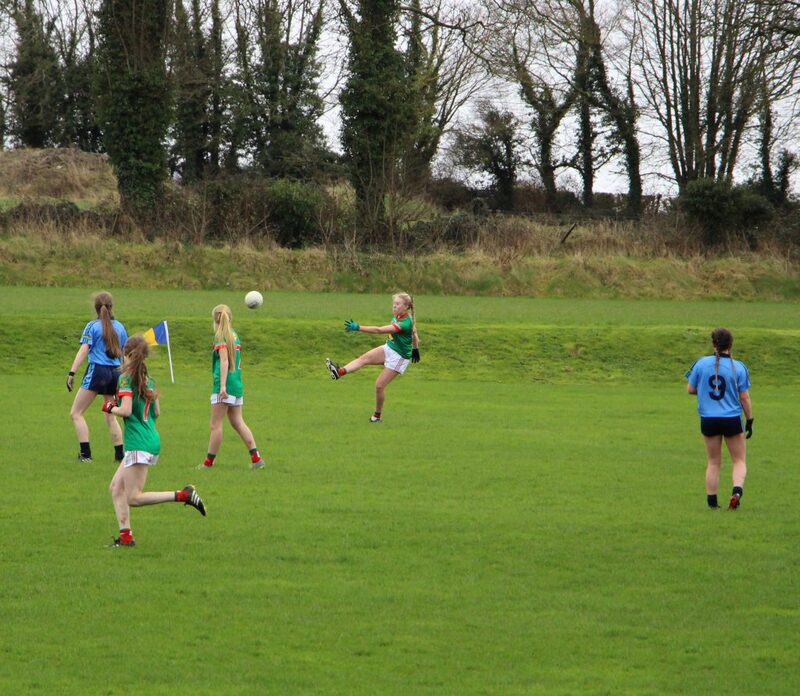 Munster Post Primary Schools Senior B Ladies Football Final – Loreto Clonmel 1-12 Scoil Phobal Rathmore 2-4
Report by Paudie Everard
It was a case of third time lucky for Loreto Clonmel as they overcame Scoil Phobal Rathmore in a brilliant game of Ladies Football in Ballygiblin on Saturday afternoon. Having been beaten in the previous two finals Loreto were in no mood to return home without the cup on this occasion and they can be extremely proud of their great win, especially the great character they showed throughout the game. Indeed the game was in doubt right up to the throw in. Snow and ice had covered part of the pitch and thanks to the great efforts of volunteers from both sets of supporters who helped clear the snow and ice to make the pitch playable so the game could go ahead. The heavy ground was energy sapping for both sides but they are to be commended for the great game they served up.
read more
Loreto got a great start when a rebounded crossbar shot was kicked to the net by Ava Fennessy. Clonmel then dominated proceedings and tacked on two more points from Kirsty Crotty Ryan. Rathmore were getting plenty of possession but the tenacious Loreto backline did not concede any scores. Loreto were creating very good scoring chances but a number of spurned goal chances and wides gave an uncomfortable feeling to the Clonmel support that this could be one of those days. On twenty minutes Rathmore were awarded a penalty which they converted. This was their opening score and they built momentum from this to narrow the gap to two points. Loreto then steadied themselves with further points and went to the break leading by 1-8 to 1-2.

The second half started at the same fast pace where we left off. Again Loreto had some good scoring chances which were fluffed. Rathmore then had a very good ten minute spell but the Loreto backs played very well and denied certain scores. Rathmore scored a very good goal to bring them right back into the game and two points was the margin once again. Loreto dug deep and finished well with further points to secure a famous victory.

Captain Aisling Deely accepted the cup on behalf of her team and thanked the management team of Niamh Barry and Brian White and all who supported and helped along the way. This was a very good game of football with some great passages of play and full commitment by both sides.

Loreto were well served by Claire Moore in goal. The six backs were outstanding and were well marshalled by Maeve Ryan at full back and Player of the Game Kelly Ann Hogan at centre back. They played from the front and consistently denied Rathmore certain scores with great block downs and tenacious tackling. Centerfield pairing of Cora Maher and Brigita Valuaintaite ran themselves to a standstill and relieved many dangerous situations especially in the second half when the need was greatest and the pressure was on from Rathmore as they tried with all their might to break down the Loreto resistance. Up front the forwards made and got the scores to win the game.

They played very well as a unit and while Loreto had plenty of near misses and some wrong options taken at times there was no denying their fierce commitment and hunger for victory. However the scores were well taken and the chances and frees were the result of hard work and great efforts. Loreto were clearly the better team and played really good football. However they could never pull away comfortably from Rathmore and had to fight all the way to hold onto their lead. 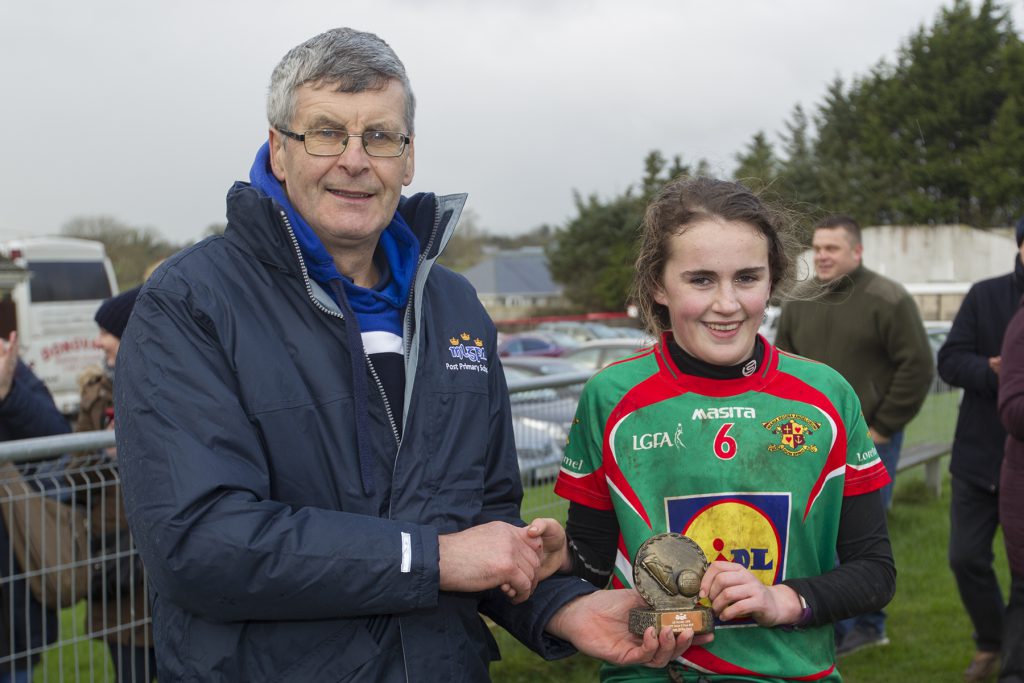 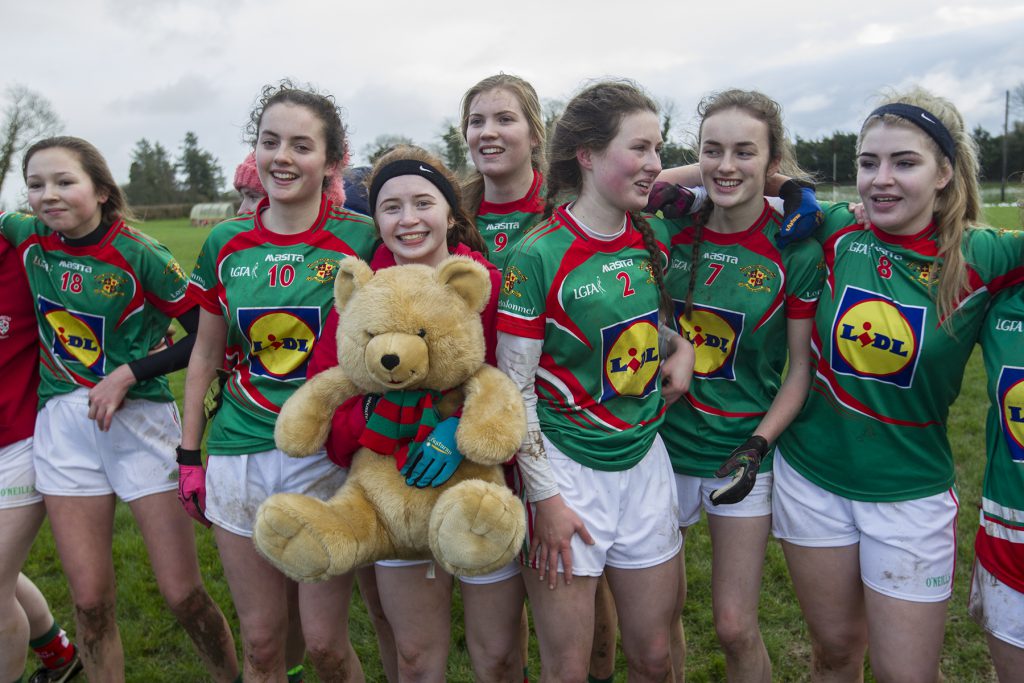 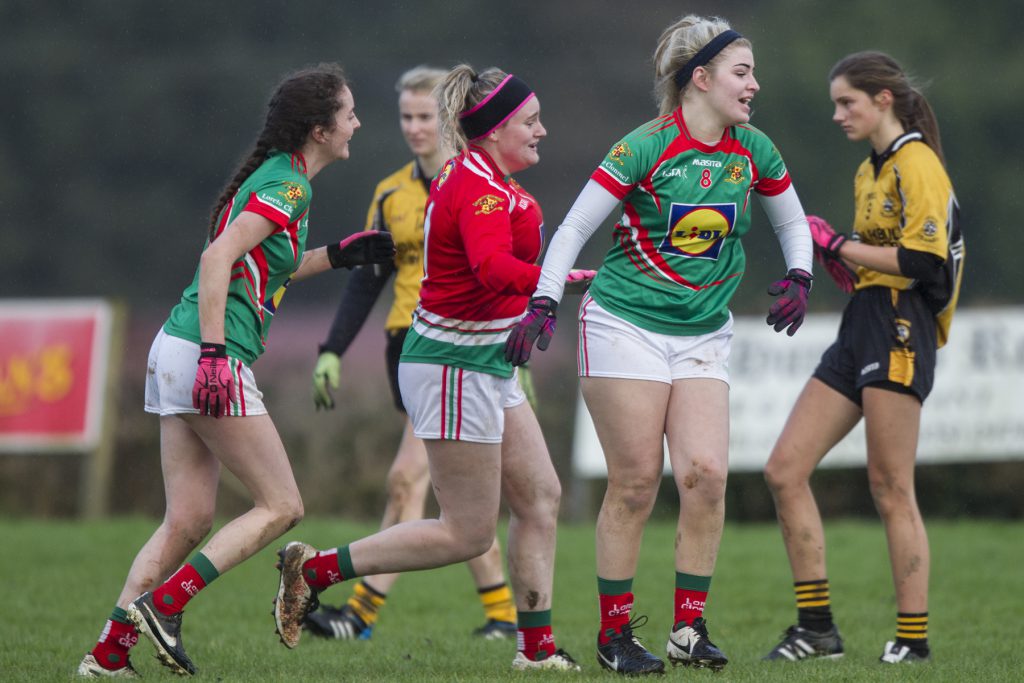 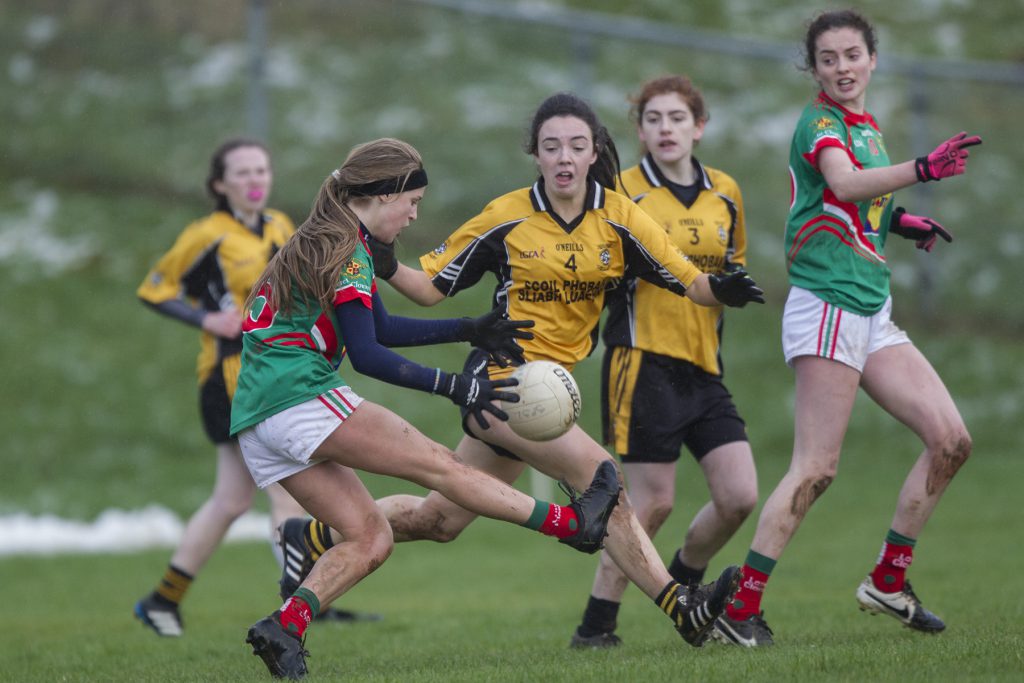 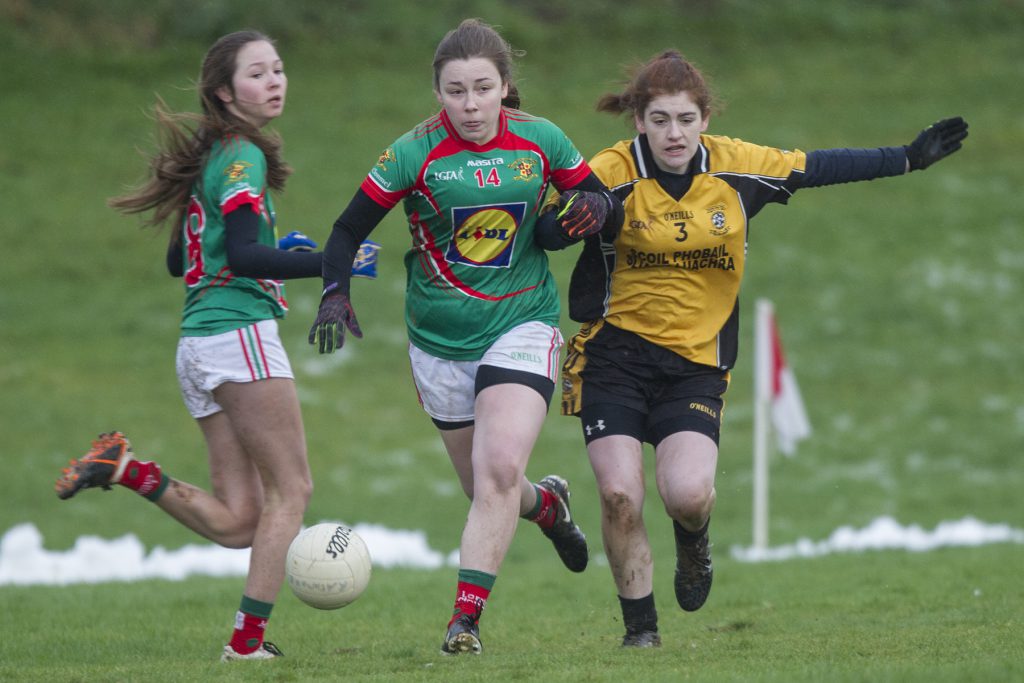 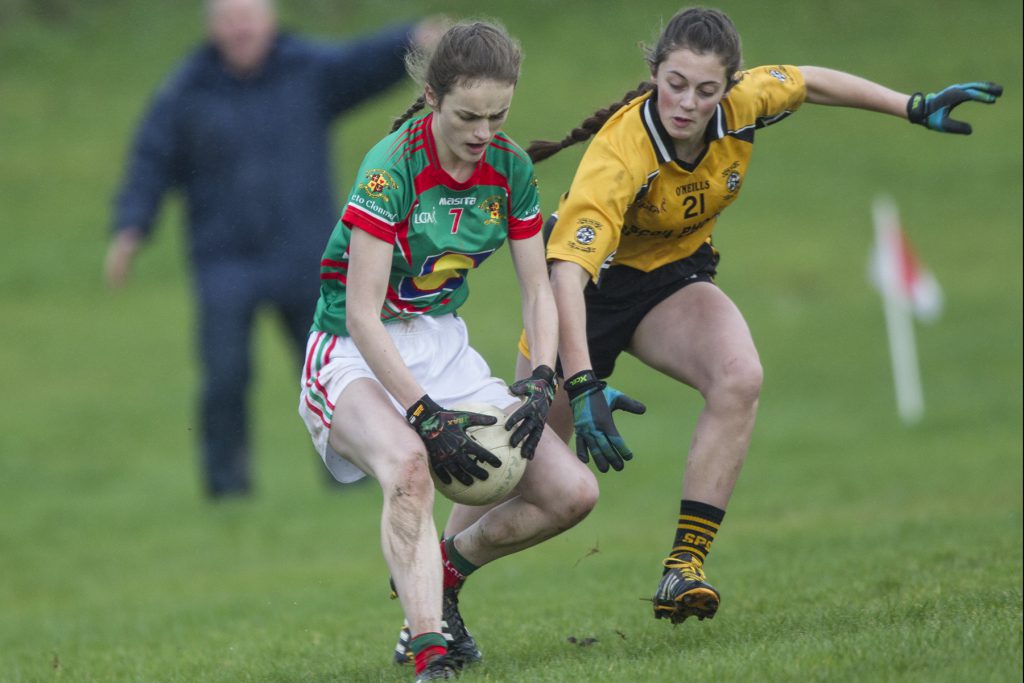 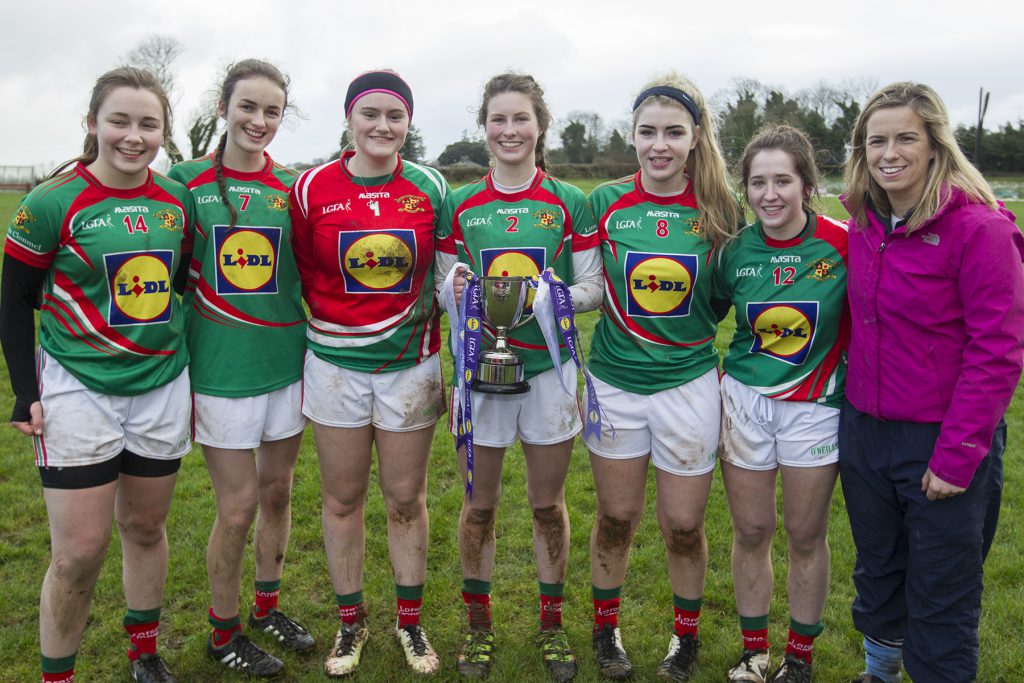 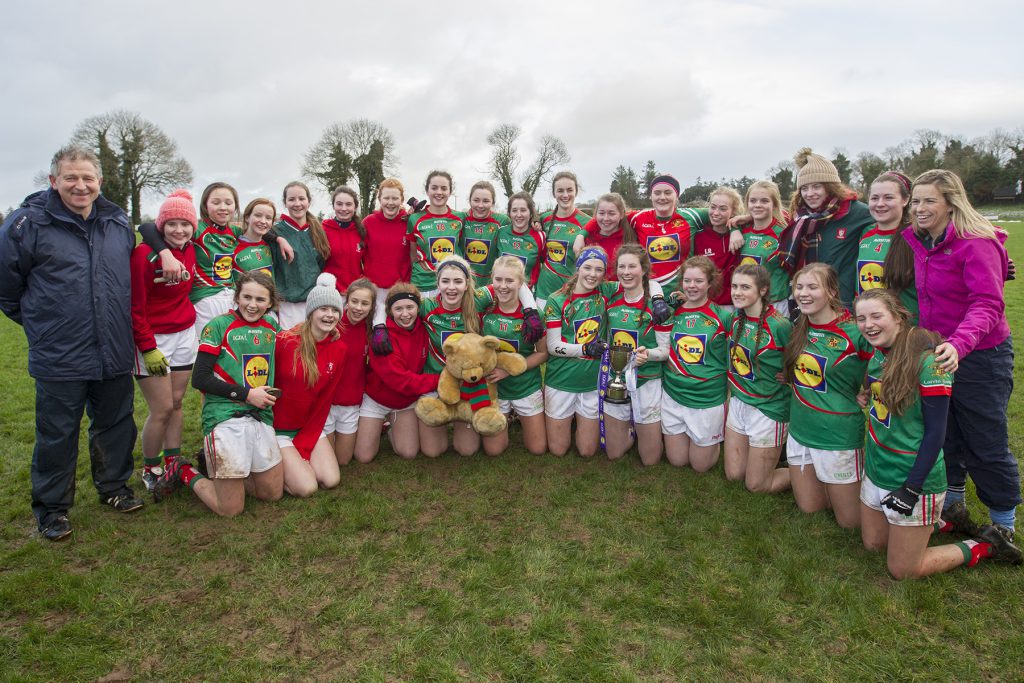 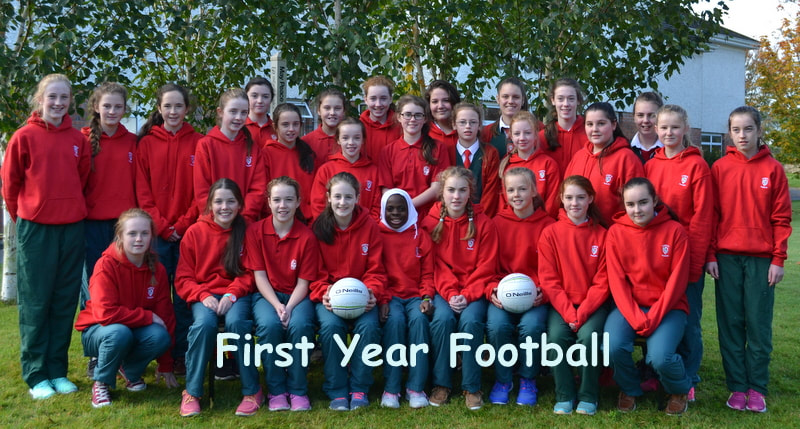 On the fourth of February, our first years travelled to Fermoy to compete in a football blitz. We entered three teams for the competition and all played extremely well throughout the day. The girls proved more than capable, with great displays of skill and strength in each game. Abbie and Cora were a great help as well in getting the teams organised and in coaching them during play.