Minor B Hockey team through to cup final!

Exciting news on the hockey front in Loreto with our Minor B hockey team into a Cup final. The girls gave a brilliant display of skill and determination on Monday the 4th of March defeating Middleton College 1 – 0.
Cup final here we come!

Minor and Junior hockey teams who were victorious against the Villiers in Limerick on Tuesday 23rd of January.  Well done to both teams and their mentor Ger Boland. 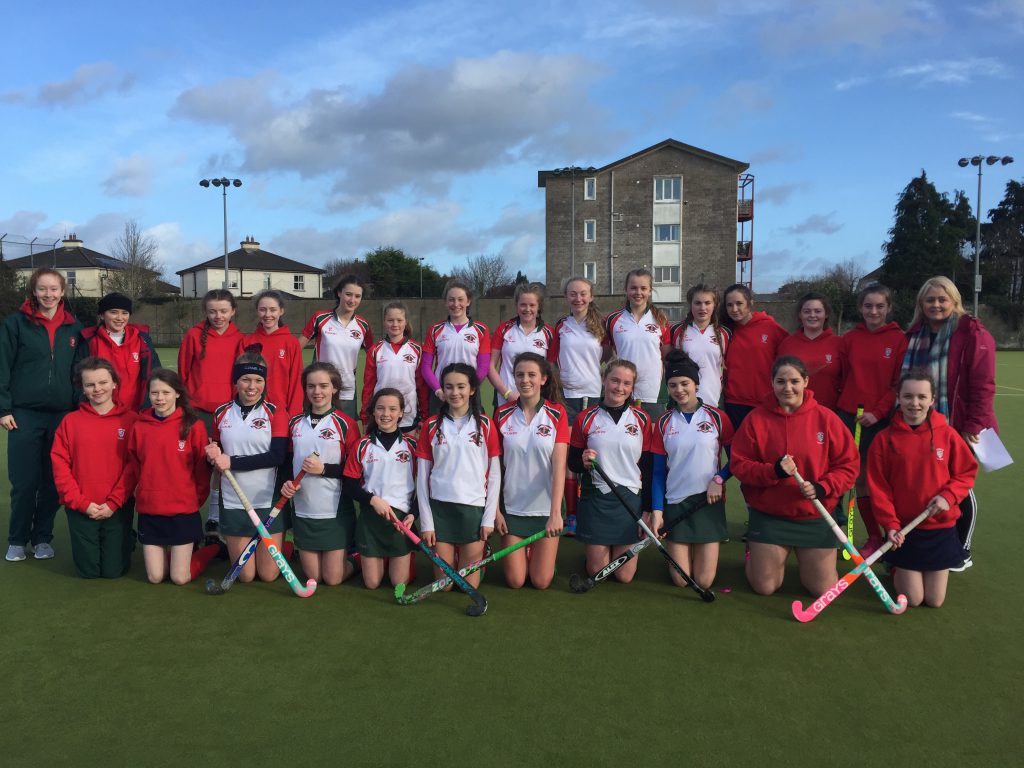 On Thursday, March 2nd, Loreto Clonmel’s minor and senior hockey teams had two victorious wins over Villiers, Co. Limerick. Our minor and senior teams travelled to the Canon Hayes Sports Centre in Tipperary town to play their opposing team. The day kicked off with our minor team stealing the show having won 8 goals to 1. This was a fantastic performance by all involved. Goals came from Veerle Van der Wal, Lauren, Ava Russell and of course Avril Goeghegan who played a stormer having scored 4 of the 8 goals to see Loreto Clonmel as rightful winners. The Senior team also had an excellent win against the Limerick team with a 5-1 win. The girls’ sheer determination and commitment was the result of their success on the day. All players put in a phenomenal effort from start to finish with great support coming from players like Sarah Garrett, Beth Fitzpatrick and Lizzie Ryan. Coming to the end of this year’s minor and senior hockey leagues, our minors have been undefeated to date and our senior team have also won the majority of their games. Well done to all involved. Loreto Clonmel Abú!

On Wednesday, 15th February, two first year hockey teams travelled to Bandon Grammar School in county Cork for a day long blitz. Both teams played a minimum of four games against schools including Coláiste na Toirbhirte Bandon, Christ the King Secondary School, Regina Mundi, Intermediate Killorglin, Ashton School, Colaiste Choilm Ballincollig, and Bandon Grammar School. After some very close matches Loreto Clonmel succeeded in winning the tournament and their win underlines how much they have improved. The girls are very committed to training and this result was just reward for all their hard work.

The following players travelled with Ms Naughton and Ms Hally to Bandon: Jess, Doireann, Aislinn, Eimear, Abbey, Emma, Saoirse, Rachel, Ella, Áine, Katy, Tara,Niamh, Triona, Kayla, Ciara, Casey, Katie, Ellie, Aoife and Katie.
​
Many thanks to Mr. Ryan and Ms. Naughton for all the hard work they have put into coaching the girls,and to TY assistants Amy and Lorraine who have helped to facilitate training since the beginning of the year. 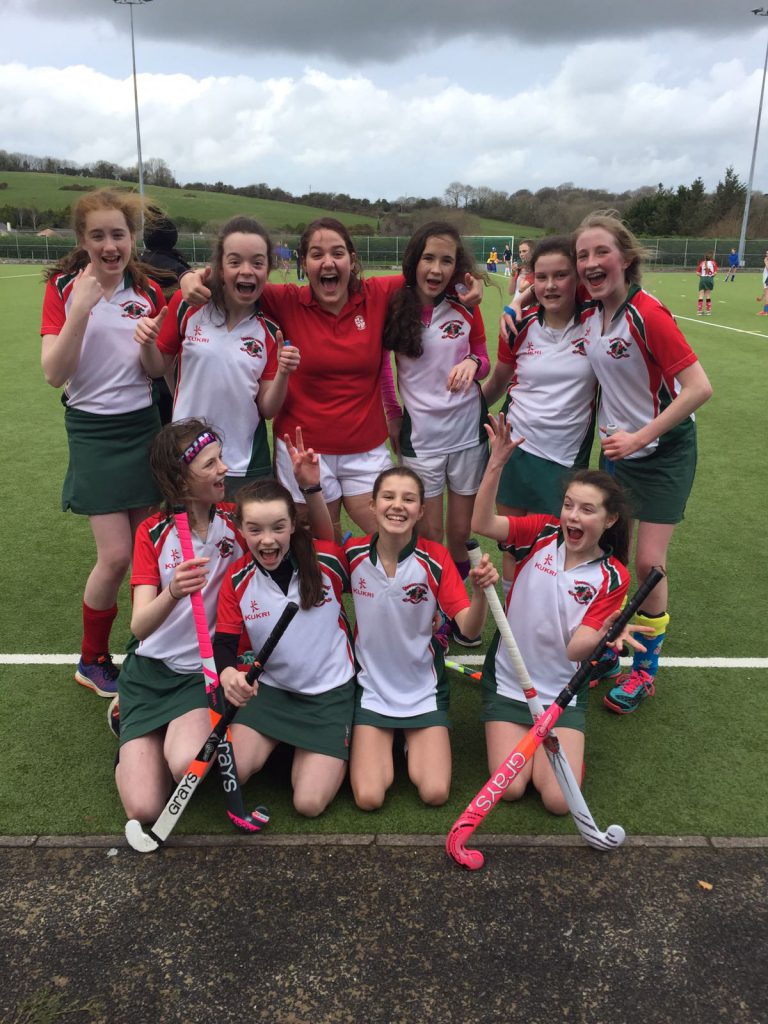 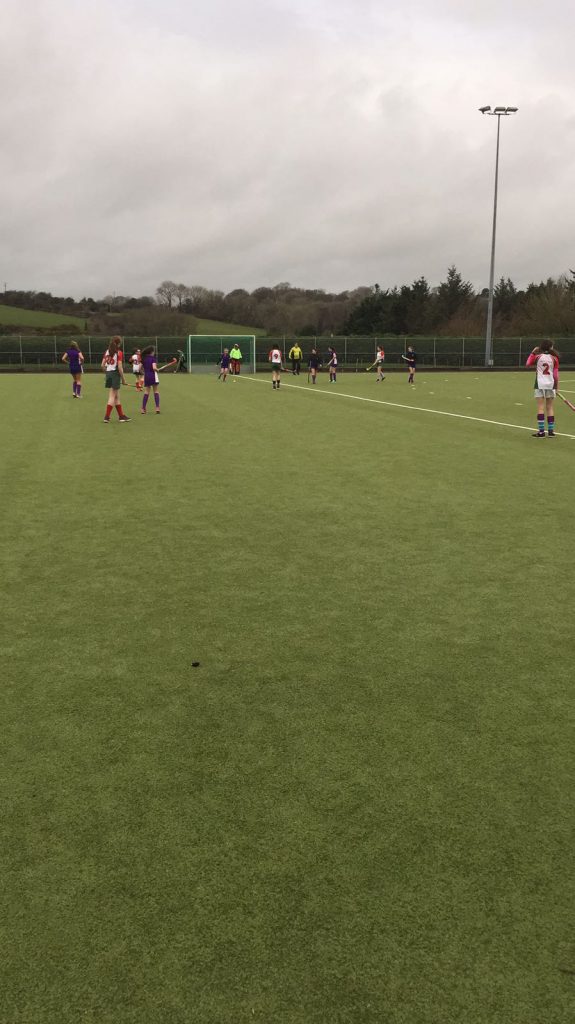 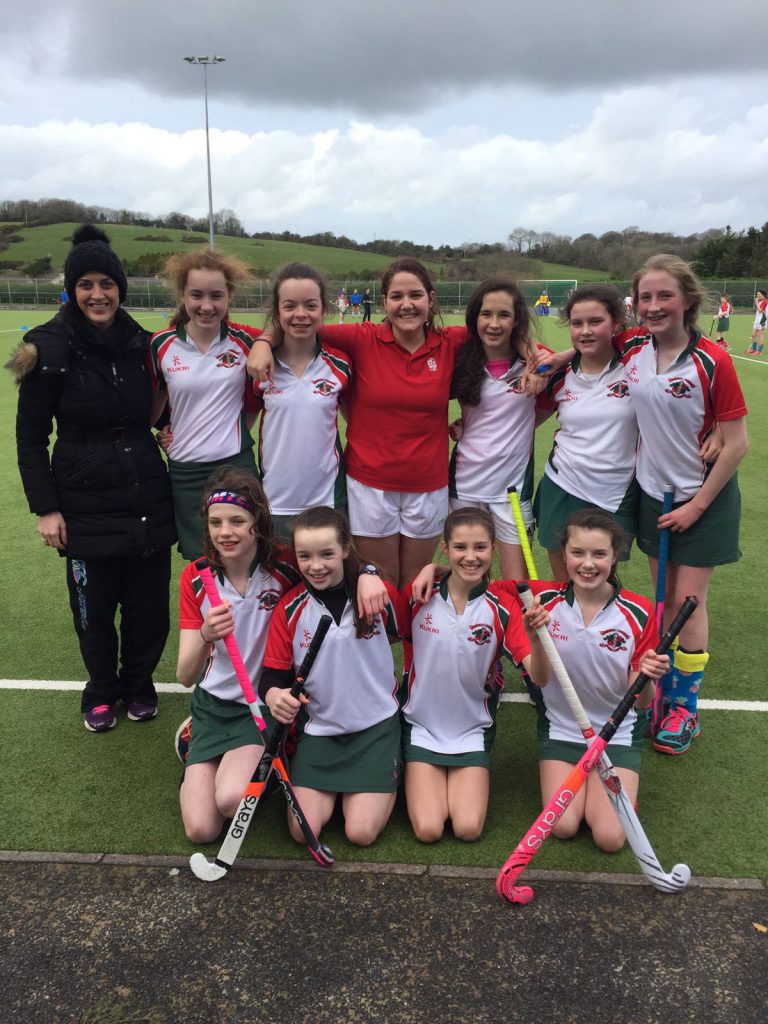 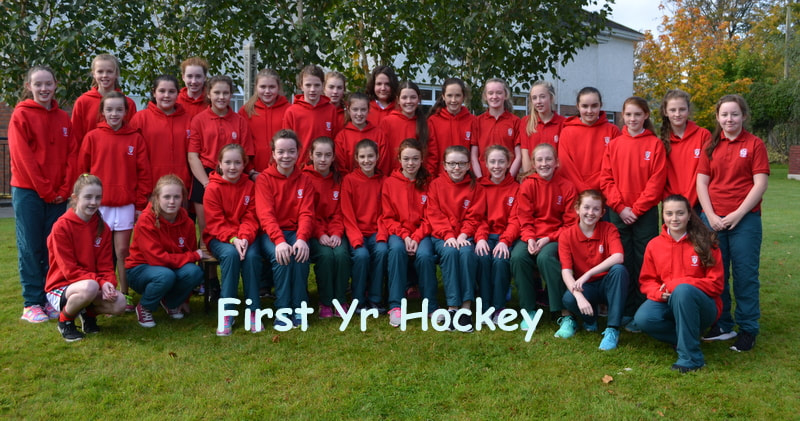 The Loreto Minor hockey team travelled to Tipperary town to play Castletroy on Tuesday 1st December. This was their first league match of the season and had been training diligently with Ger Boland (coach). Straight after half time, Loreto were dominating the play and determined to score. There were four short corners taken in the second half but unfortunately none of them turned into goals. Midfielders were playing very well, constantly forcing the play up the pitch and supplying great ball to the forwards. There were many goal chances for Loreto, but the game ended 0-0. Loreto girls were extremely disappointed but played an excellent game and never gave up. They have a very busy schedule ahead with their next match on Monday 14th December and January 15th. The team was accompanied by Ms. Kirby and Ger Boland (coach). 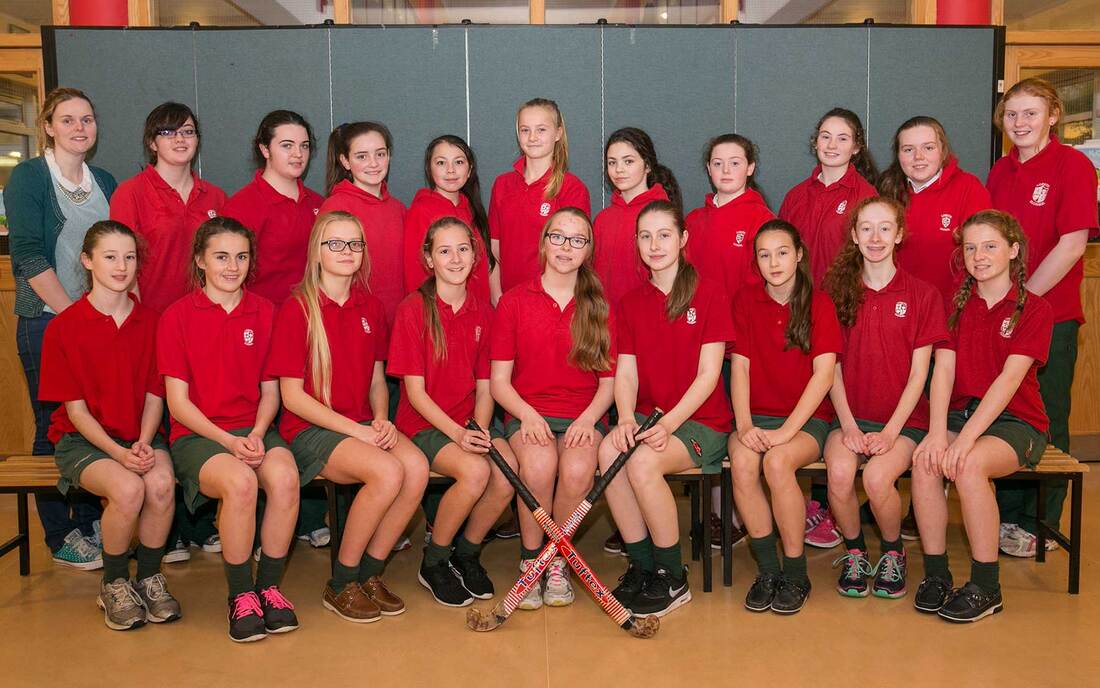 The Junior hockey team has played three league matches, with two great wins and one narrow defeat. The first game was played in Tipperary Town against St Anne’s on Thursday 5th November, where we won 6-0 in very impressive fashion. Then the team travelled to Limerick to play Villers on Friday 13th November and on this occasion they went on to win the match 3-1. Most recently the team played Castletroy Community School in Tipperary on Tuesday 1st December. This was a very tough and close encounter where both teams were very competitive from the opening whistle. Loreto fell behind early on but were well on top as the game progressed. We had the majority of possession in the second half but were unable to get the decisive score. However, it was an excellent team performance and Loreto Juniors are well place to win the League this year. Great credit to the coaching team of Ger Boland, Ms. Kirby and Ms Hally. 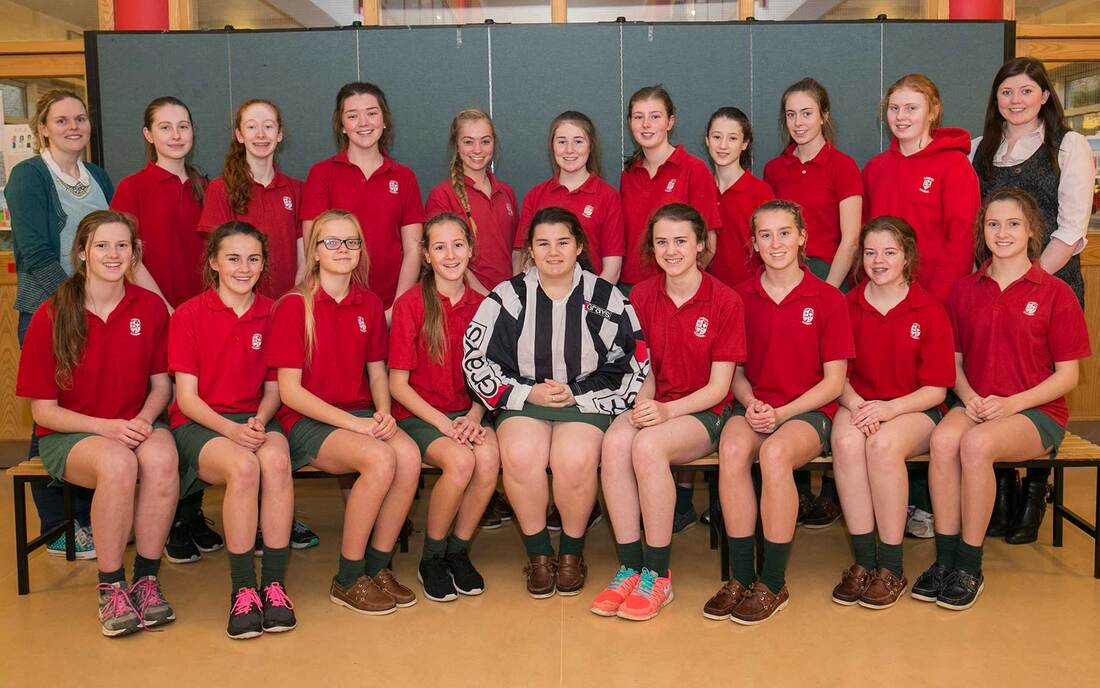 Our Senior Hockey team stands proudly on top of the League Table after recording three successive victories. This year we have a very strong panel of players and with Ms Emma Smith as Coach the girls are playing with great skill and no little determination.
They beat Presentation Thurles 2- 1 in their opening game in Rockwell on November 5th. This provided the impetus to put in a very strong performance one week later in Tipperary, when they beat St Annes’s on a scoreline of 6 nil. They then went on to beat a very physical Villiers team by 3 goals to 2 in a tense and close encounter in Villiers and this now puts them in pole position as they eye up Laurel Collaiste and Castletroy early in the New Year. These games will surely determine the winner of this year’s competition.
Special tribute must go to the 6th Year players, who show great leadership for the team and especially the ever reliable, skillful and enthusiastic captain, Megan Shanahan. 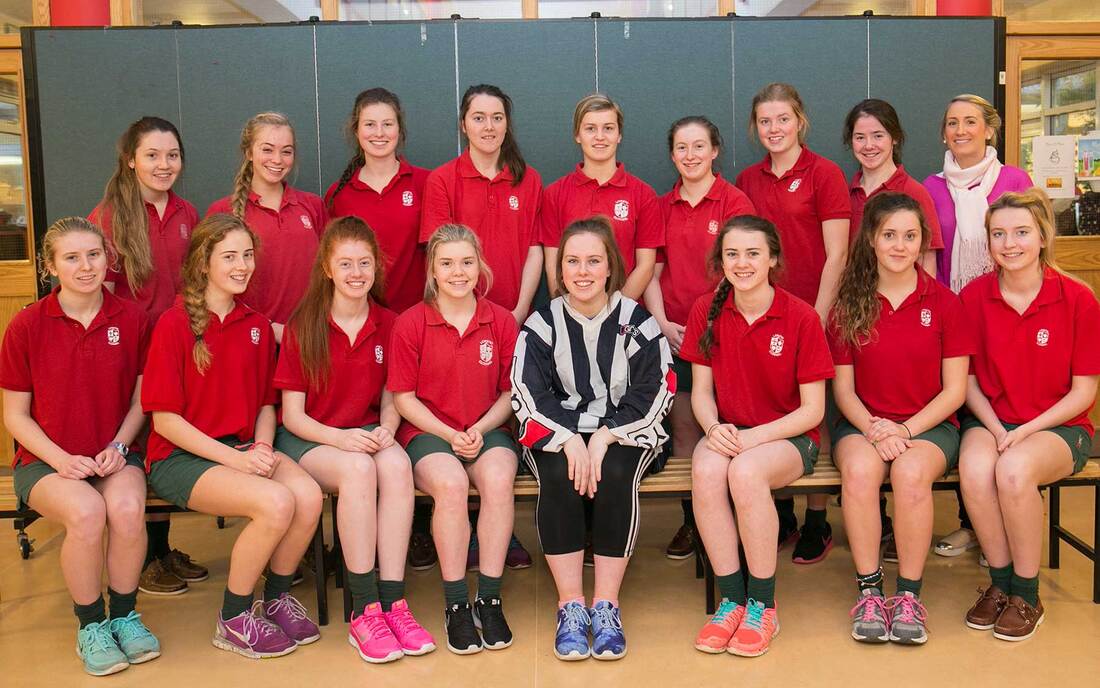